By OakTV   |   12 October 2017   |   12:08 pm
Share on Facebook Share on Twitter Share on Google+ Share on WhatsApp Share via Email
The Senate, yesterday, raised the alarm that the 19 Northern states of the federation were under serious threat due to drug abuse, stating that over three million bottles of codeine syrup were consumed daily in Kano and Jigawa states.
In this article:
drugSenate 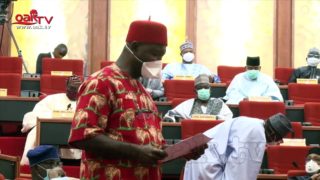